In the mid to late 1970’s, domestic violence and sexual assault programs started popping up around Kansas. They first established in larger communities and then spread across the state into rural areas.

No matter the geographical location, whether in the city or countryside, women and their children faced nearly identical issues as they sought help with the abuse, assault, and rape in their lives; it was as if abusers had a “playbook.”

Programs began to see system issues that needed attention to better serve victims and survivors. “Fixing this” was going to involve more than providing support to victims. We would also need to speak with one unified voice in order to implement critical systems changes that would ultimately reduce violence against women and their children.

In 1979, directors from domestic violence programs began meeting with each other, and directors from sexual assault programs began meeting with each other. They each separately formed two state level groups, the Kansas Organization of Sexual Assault Centers (KOSAC) and the Kansas Association of Domestic Violence Programs (KADVP). In 1982, KADVP incorporated as a business, and the two organizations, KADVP and KOSAC, later merged; the Kansas Coalition Against Sexual and Domestic Violence (KCSDV) was born.

Over the years, the coalition grew from several programs in the state to 26. And, KCSDV as an organization grew too – from a part-time director in 1987, working out of a converted garage in Lawrence, to an established organization with over 25 full-time staff in the organization’s own building near the Topeka state capitol.

Through the years, KCSDV has had formal collaborations with state agencies, other statewide organizations, and with elected officials. (Thank you to our partners!)

This year, KCSDV celebrates 40 years of coalition building, collaboration, and progress on the organization’s mission to prevent and eliminate sexual and domestic violence. 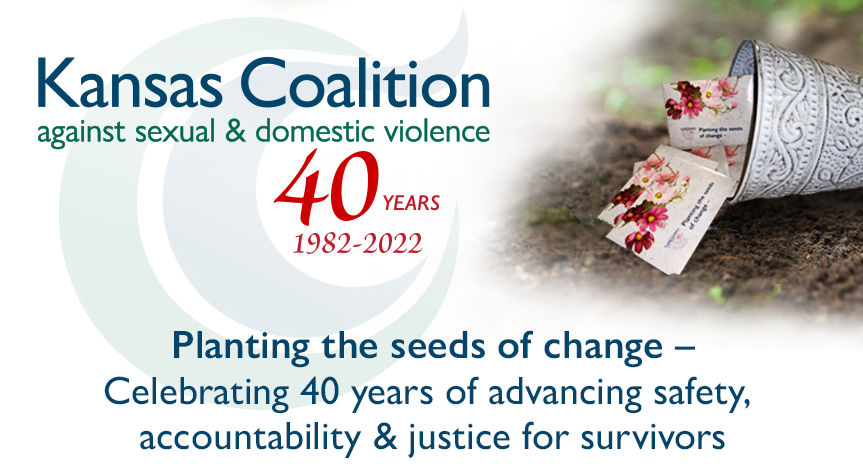