According to the Centers for Disease Control and Prevention, 1 in 3 women and nearly 1 in 6 men experience some form of contact sexual violence in their lifetimes.

“Sexual violence affects the lives of many Kansans, and it is critical that we work together to raise awareness,” said Joyce Grover, Executive Director of the Kansas Coalition Against Sexual and Domestic Violence. “The majority of rapes are committed by someone known to the victim – in 80% of Kansas cases.”

Sexual assault and rape are some of the most underreported crimes. There are a wide range of reasons why people do not report, including fear of the rapist, self-blame, self-doubt, shame, guilt, and embarrassment. Fear of not being believed is one of the strongest deterrents to reporting.

Sexual assault advocates have found that many people experience sexual violence as a severe emotional and physical violation. The effects of that violation may be felt directly after the assault or for many months or years later. The trauma from sexual violence can cause feelings of helplessness and powerlessness, as well as physical symptoms such as breathing problems or nightmares. Research has also found that this trauma can affect the way the brain recalls memories and details of the assault.

“We live in a society where the victim is often blamed for where they were, who they were with, what they were doing, or what they were wearing,” said Grover. “When we question victims’ responsibility for their own rape, we deflect blame from the offender. Rape is never the victim’s fault, and offenders must be held accountable.”

In 2020, one incident of rape was reported to Kansas law enforcement every 7 hours, 56 minutes, and 5 seconds; and in 2021 more than 5,300 people received services for sexual assault from Kansas victim advocacy organizations.

Sexual harassment, assault, and abuse can happen anywhere, including in online spaces. For too long harassment, cyberbullying, and sexual abuse and exploitation have come to be expected as typical and unavoidable behaviors

State-level efforts in Kansas are underway to raise awareness and prevent sexual violence. The Kansas Bureau of Investigation’s Kansas Sexual Assault Kit Initiative worked collaboratively to develop a number of resources for responders. The Kansas Coalition Against Sexual and Domestic Violence currently partners with the Kansas Bureau of Investigation and other multidisciplinary stakeholders on the Kansas Sexual Assault Response Advisory Committee.

Kansas victim advocacy organizations provide free and confidential services to victims, survivors, and their families. If you or someone you know needs help, call the Kansas Crisis Hotline at 1-888-363-2287 or visit www.kcsdv.org/find-help. 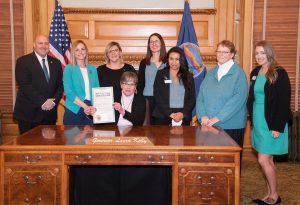 Founded in 1982 and celebrating 40 years of service this year, the purpose of KCSDV is the prevention and elimination of sexual and domestic violence through a statewide network of programs providing support and safety for all victims of sexual and domestic violence and stalking with a primary focus on women and their children; direct services; public awareness and education; advocacy for victims; comprehensive prevention; and social change efforts. Learn more at https://www.kcsdv.org/.