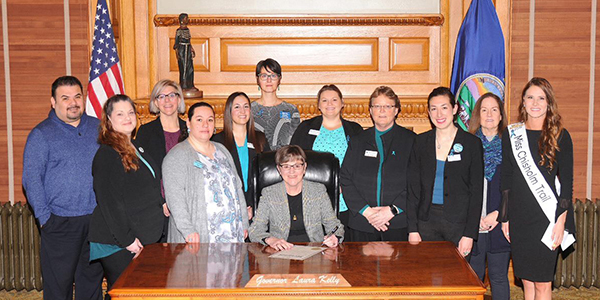 Sexual Assault Awareness Month is about awareness and prevention of sexual assault, harassment, and abuse.

The National Sexual Violence Resource Center describes the history of Sexual Assault Awareness Month: “Even before its official declaration, SAAM was about both awareness and prevention of sexual assault, harassment, and abuse. Looking at the history of the movement to end sexual violence, it’s clear why: It’s impossible to prevent an issue no one knows about, and it’s difficult to make people aware of a problem without providing a solution. The two work in tandem, and they always have. From the civil rights movement to the founding of the first rape crisis centers to national legislation and beyond, the roots of SAAM run deep.”

In 2018, 26 victim advocacy services organizations across the state served over 6,000 victims of sexual violence. However, only 1,231 offenses of rape were reported statewide to law enforcement. More than one in 12 Kansas women were victims of rape as reported by the Kansas Department of Health and Environment in 2011, and nearly one in five women in the U.S. have been raped in their lifetimes according the National Sexual Violence Resource Center (NSVRC) in 2011. NSVRC also reports one man in 71 men will be raped at some point in their lives. One incident of rape was reported to Kansas law enforcement every seven hours and six minutes. One in three women and one in six men experienced some form of contact sexual violence in their lifetime. In 80 percent of rape cases in Kansas, the offender is someone known to the victim, a statistic that upsets the idea of “stranger danger” and shows the problem is closer to home.

According to the Centers for Disease Control and Prevention, sexual violence is any sexual act that is perpetrated against someone’s will. Sexual violence encompasses a range of offenses, including a completed nonconsensual sex act (i.e., rape), an attempted nonconsensual sex act, abusive sexual contact (i.e., unwanted touching), and non-contact sexual abuse (e.g., threatened sexual violence, exhibitionism, verbal sexual harassment). All types involve victims who do not consent, or who are unable to consent or refuse to allow the act. Sexual violence can happen to anyone, regardless of gender, age, race, sexual orientation, socioeconomic status, or ability. Sex offenders use many methods to intimidate the victim. They might use trickery, manipulation, coercion, bribery, blackmail, or threats. Offenders often take advantage of people they perceive as vulnerable or less powerful.

For more information about sexual violence and to find help, please visit KCSDV’s website at http://kcsdv.org.