This week, on April 12 and 13, KCSDV partnered with the Children’s Advocacy Centers of Kansas to host the Virtual Preconference Institute to the 23rd Annual Kansas Crime Victims’ Rights Conference, Justice Begins With a Trauma-Informed Approach: Why the Neuroscience Matters and What to Do With It.  Blue Cross Blue Shield of Kansas was a sponsor of the event.

Over 250 professionals from across Kansas attended the training, which was presented by national experts Jim Hopper, Ph.D., and Tom Tremblay.

Jim Hopper presented on the neurobiology of trauma, helping responders to better understand the neuroscience behind behaviors that occur during assaults and why many victims do not ‘fight

back’ during a sexual assault.  Hopper described how during a sexual assault, the perpetrator is not stressed and the prefrontal cortex is in control.  For a victim, they are afraid and their defense circuitry in control.  “The reality is, in most sexual assaults, the perpetrator is a repeat offender.  They’re not that stressed in this situation, they’ve done it before, they’ve picked a victim that they think is vulnerable, and got them in a vulnerable place, and their thinking and behavior tend to be planned, practiced, and sadly, even habitual is some cases,” said Hopper.  “Whereas, the victim’s brain is in a totally different state.  Once that defense circuitry kicks in and the stress is strong, and the fear and the terror [are strong], they’re stressed, they’re traumatized, their defense circuitry is in control, their attention and thoughts are reacting to the perpetrator and what the perpetrator is doing to them, and their behavior tends to be controlled by reflexes and habits,” said Hopper.

Tom Tremblay presented on trauma-informed, offender-focused investigations and prosecutions, and best practices for multidisciplinary teams.  “There is a lot of potential evidence for us to consider when we look at the sex offender course of conduct and MO [modus operandi],” said Tremblay.  “When I talk about trauma-informed, victim-centered, offender-focused… when we talk about this is the way to shatter the ‘sexual assault cycle of doubt’… it is looking at the pre-assault behavior, of course looking at the assaultive behavior, and then the post-assault behavior.  If we understand these behaviors and look at it as premeditation, then I think we are going to be offender-focused.  Let’s put our energy and focus on the actions of the offender,” said Tremblay.

The preconference ended with a panel question and answer session that also included Juliane Walker, Executive Director of the Children’s Advocacy Centers of Kansas, and Kathy Ray, KCSDV Director of Advocacy, Education, and Rural Projects, and was moderated by Teresa Gallegos, KCSDV Training and Education Manager. 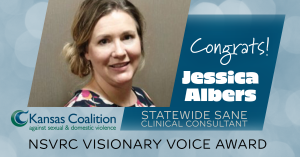 SANE-P.  Every April during Sexual Assault Awareness Month, the Visionary Voice Awards recognize the creativity and hard work of individuals across the county who demonstrate outstanding advocacy and community work to end or prevent sexual violence.  “Jessica has been instrumental in improving responses to sexual assault in Kansas.  Her work is victim-centered, trauma-informed, and has improved responses to victims and survivors statewide,” said Ray during the event.  Jessica Albers is a board certified Sexual Assault Nurse Examiner (SANE).  She served on the KBI’s Kansas SAKI Multidisciplinary Working Group, and now on the Kansas Sexual Assault Response Advisory Committee.  She provides training and education for SANEs statewide, as well as training for hospital emergency departments on trauma-informed care and sexual assault evidence collection for patients.  She was instrumental in updating the KBI’s Sexual Assault Evidence Collection Kit to reflect current best practice and evidence-based recommendations.

For the remainder of the week, KCSDV staff presented at and attended the Kansas Governor and Attorney General’s 23rd Annual Kansas Crime Victims’ Rights Conference, which was held virtually this year for the first time ever.