The Power and Control Wheel is an infographic describing how abusers and batterers do things to gain power and control over another person – that person usually being their intimate partner, who is in an intimate relationship with them. The Power and Control Wheel is foundational to the work of domestic violence, because both components – “power” and “control” – are central to patterns of abusive and violent relationships. Domestic violence refers to, includes, and is also called: “intimate partner violence,” “intimate violence,” “domestic terrorism,” and “coercive control.” 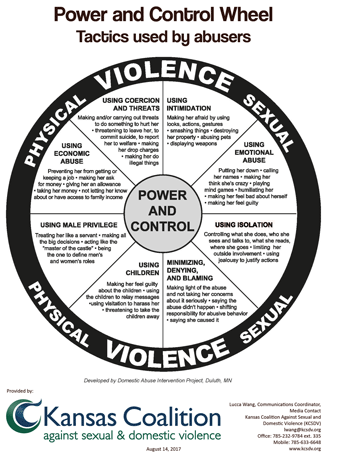 The Power and Control Wheel is in the shape of a circle and resembles a wheel. At the center of the wheel is a small circle with the text “power and control” inside it. Abusers feel entitled to power and control, and how they gain that power and control is by using certain tactics. There are nine lines, or wheel spokes, coming from the smaller circle and connecting to the larger circle, creating eight spaces between the spokes. In each of the eight spaces, eight main, universal tactics are written out. The tactics include: 1) Using intimidation, 2) Using emotional abuse, 3) Using isolation, 4) Minimizing, denying, and blaming, 5) Using children, 6) Using male privilege (or gender, sex, race, and socioeconomic privilege), 7) Using economic abuse, and 8) Using coercion and threats. The outer rim of the wheel encloses all of the tactics of power and control and is physical and sexual violence.

“The ones that are on there, I think, are core tactics that almost all abusers use,” said the late Ellen Pence, who helped create the Power and Control Wheel when working at the Domestic Abuse Intervention Project (DAIP). The Domestic Abuse Intervention Project (DAIP) began in 1980 in Duluth, Minnesota, United States. In 1984, DAIP began creating curricula, or teaching materials, for people to teach to groups of men who battered and abused and to teach to groups of women who were victims of domestic violence. The point of creating these teaching materials – and teaching this topic at all – was to teach abusers alternative, healthier ways of interacting with their intimate partners.

Pence said, “When we were deciding what we were going to teach, we went to those women’s groups and said, “Okay, if we can get these guys [the abusers,] for eight weeks or 10 weeks or 15 or however long we can get them, what would you like us to teach them? And out of that eventually came the Power and Control Wheel, those sessions with the women.” Another wheel grew from these developments as well: the Equality Wheel.

The point of teaching the Power and Control Wheel to victims was to help victims tangibly recognize tactics inflicted upon them, identifying the patterns of abuse and danger and helping them express and articulate their experiences for healing and their lives in the future. Putting these tactics into a concrete form helps victims know they are not alone in their experience – that this is a studied pattern and system of abuse and that there is help outside of the relationship (if they are able and willing, desire, or think it is best to reach outside of the relationship).

But how did the Domestic Abuse Intervention Project (DAIP) create this image that is the Power and Control Wheel? DAIP had about three groups of women, who were victims of domestic violence, in different areas of the city of Duluth. The groups were support groups, where women could talk about their experiences with each other to help them heal from their traumatic experiences and figure out viable, real solutions moving forward. (Some of the situations people could need help with include: staying in the relationship, how to address breaking up or not breaking up the family, housing, child care, health care, finances, education, employment, protection orders, immigration, and self-care.) In the support groups, DAIP conducted focus groups, engaging in focused conversations, with victims about what their abusers would do to them and how the abusers would treat them.

Pence says she remembers one woman telling her that living with a batterer and their abuse is not cyclical (not a cycle of abuse like the social cycle theory by Lenore E. Walker), because when he is not outright acting violent, his behavior (the violence) still incites fear even when he was telling her she was beautiful and that he wanted and needed her.

“Then I started saying, “Well, okay what else is it like to live with a batterer? And then I remember coming back from that meeting and saying to Cora and Michael, “We just gotta go to these women’s groups and ask these questions.” So we started going, “What’s it like to live with them? Describe it.” And people started to tell stories, and then we got into the word “tactics.” Somehow in the process, the word “tactics” came out, and we started asking them, “What other tactics does he use against you besides violence?” Pence described how asking that question really opened up responses, and from those responses, DAIP formulated the different categories, the tactics, that we now see on the Power and Control Wheel.

The Domestic Abuse Intervention Project (DAIP) also sat down and talked with abusers about what they did in their own words.

“And when we would talk to the groups of men, who were the abusers, they never said they wanted power and control, but what they would say is ‘She just made me so angry and I wanted her to shut the hell up.'” Pence said entitlement (and privilege) is key to abuse – and at KCSDV we identify different types of privilege whether that is gender, sex, race or socioeconomic status.

Ellen Pence was one of the mothers of the movement to end domestic violence. She passed on January 6, 2012. The Domestic Abuse Intervention Project (DAIP) is still an active group in Duluth today. 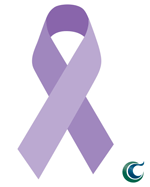 To learn more about the Power and Control Wheel, visit the Domestic Abuse Intervention Project’s website at https://www.theduluthmodel.org/wheels/faqs-about-the-wheels/. (And, happy Domestic Violence Awareness Month (October) to a fellow organization working to prevent and eliminate domestic violence!)

Find free, confidential, and voluntary help near you: https://www.kcsdv.org/find-help/in-kansas/dv-sa-services.