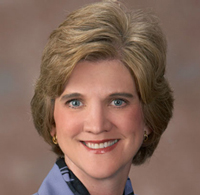 The KCSDV State Level Ally of the Year is given to someone who demonstrates a commitment to enhancing victim safety, increasing perpetrator accountability, or working to end or prevent sexual or domestic violence, stalking or dating violence in Kansas. Award winners show sustained leadership and public service in efforts that are consistent with victim-centered, empowerment-based advocacy.

Ms. Wegener has worked with KCSDV for many years in its efforts to increase public awareness and to increase the understanding of the challenges victims face. She has been involved with the statewide Safe Homes Safe Streets awareness event for the last 11 years, often acting as the emcee. Two years ago she served on a committee to recognize the 30th anniversary of the Kansas Coalition Against Sexual and Domestic Violence (KCSDV).

Ms. Wegener has also been a leader in recognizing the importance of a workplace response to domestic violence. With her assistance, Blue Cross and Blue Shield of Kansas was one of the first major employers in the state to implement a workplace policy on domestic violence. She has assisted with efforts to encourage other employers to do the same. Ms. Wegener recognized the critical nature of financial stability for victims. Additionally, she understands the long- and short-term health consequences that domestic and sexual violence has on individuals and on our broader society.

“Ms. Wegener exemplifies everything a state level ally can be,” said Joyce Grover, executive director of KCSDV. “Marlou has helped many Kansans recognize the importance of addressing domestic and sexual violence in our workplaces, in our communities, and in our families,” Grover said, “we can’t do this work without community partners like Marlou Wegener.”

PDF of this release