In a Facebook post, the Governor’s Office announced the Proclamation saying, “Millions of people across our state and nation are affected by domestic violence each year. To help raise awareness and show support for victims and survivors of domestic violence, I signed a proclamation marking October as Domestic Violence Awareness Month in Kansas.”

The proclamation was written and submitted by the Kansas Coalition Against Sexual and Domestic Violence (KCSDV). KCSDV leadership and staff and KCSDV coalition member program leadership and staff, YWCA Northeast Kansas CEO Kathleen Marker and YWCA Center for Safety and Empowerment Public Education Coordinator Cam Cameron, were present for the proclamation ceremony signing.

The awareness month stems from the movement to help victims and survivors of domestic violence. The first Day of Unity for victims and survivors was held in 1981, and this evolved into a week-long period of gathering and events to increase awareness about domestic violence. The first Domestic Violence Awareness Month was established in 1987, and in 1989, federal legislation passed to nationally recognize Domestic Violence Awareness Month in October.

Domestic violence, intimate partner violence, is a pattern of abusive and coercive behavior used to gain dominance, power, and control over an intimate partner. It includes the use of illegal and legal behaviors and tactics that undermine the victim’s sense of self, free will, and safety. The abusive behavior can impact other family members and can be used in other family relationships. Abusive tactics that all abusers use in varying levels include but are not limited to: physical violence; sexual violence; coercion and threats; intimidation; emotional abuse; isolation; using children; economic abuse; male privilege/entitlement; minimizing, denying, and blaming. 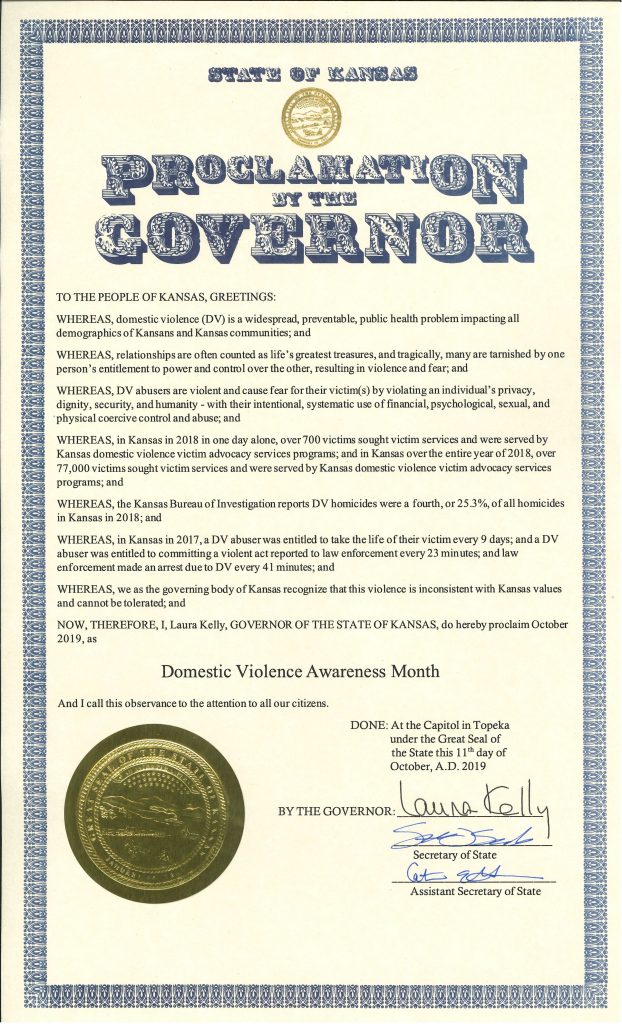 For further information on domestic violence, contact Lucca Wang at 785-633-6648 and lwang@kcsdv.org.